FUNDED BY THE CITY OF PLAUEN

Near the the vintage stone bridge at Neustadtplatz you will find two commemorative plaques in the grass which explain the symbolic contents this bridge represents. In German and English they explain the history of one of the oldest stone bridges in Europe, having survived more than 800 years and representing one of the few remaining medieval bridges, more beautiful than ever before. In the spring of 1945 US soldiers prevented its destruction at the last minute...

The old Elster Bridge in Plauen in its present splendor.

The commemorative plaques in German and English

On April 16, 1945, the 87th Infantry Division of the 3rd US Army had reached Plauen and after a long march through the bombed-out city it arrived in the afternoon near the city center the Neustadtplatz. Plauen had suffered a total of 14 bombing raids by Allied bomber fleets of which the last one on April 14 practically leveled the city, the situation was unclear.

Thomas Stafford, Platoon Leader of the L-Company of the 347th Infantry Regiment of the 87th Infantry Division wrote in his records: “Most of the buildings we observed as we moved deeper into Plauen had been severely damaged, many with only a few walls remaining; others were totally destroyed.  The majority of the city’s streets, many with gaping bomb craters, were nearly impassable...” 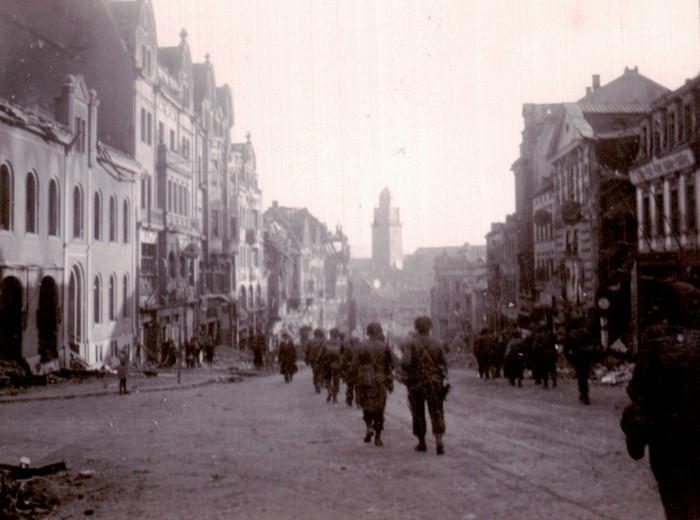 Advancing soldiers of the 87th Infantry Division
in the Bahnhofstrasse of Plauen on April 16, 1945.
(Foto: Archiv A. Bräuer) 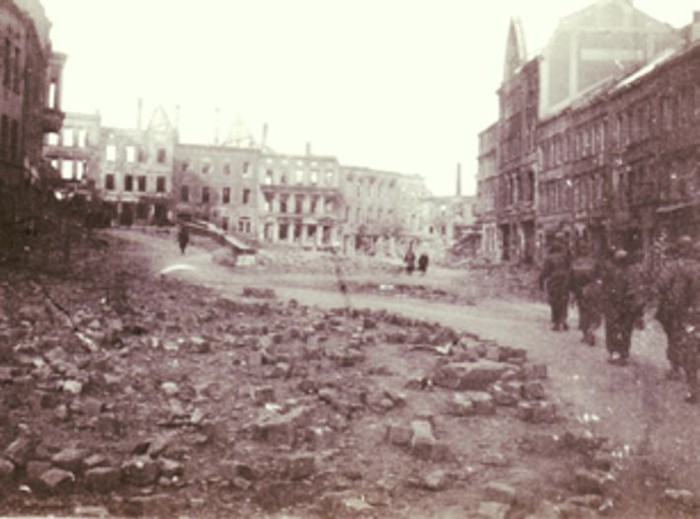 The troops reached the heavily damaged Neustadtplatz,
once part of the pulsating center of the city.
(Photo: Archiv A. Bräuer)

While the 1st Platoon marched down from the north on Pausaer Strasse, the Commander of the L-Company, Captain Kidd, received a message from an observation plane that the Germans were making efforts to blow up the bridge over the Elster river. Sergeant Stafford’s 2nd Platoon was ordered to advance, reinforced by several tanks from an armored unit.
“When we arrived at the bridge we saw a group of Germans who obviously were occupied with preparations to blow up the bridge. I stationed one tank each on either side of our end of the bridge and under the salvos from the tanks my men and I marched across the bridge, hoping to defuse the demolition charges.”
They succeeded. The Platoon secured the area beyond the bridge without any problems, and some of the German soldiers were captured while fleeing.
In his rush to save the bridge Stafford had ignored to secure his perimeter by searching the surrounding buildings which could have been a fatal error. A Platoon arriving later under the command of 2nd LT Ray Stander found a group of German officers and enlisted men in a basement who obviously had orders to destroy the bridge. Fortunately, they did not intervene.

Platoon leader Stafford could not forget these events. The wall had hardly come down when he came to visit Plauen together with his wife Gayla in early 1990. The climax was his visit in April 2010, together with some of his comrades from 1945 when they accepted an invitation from the organizers of the Liberty Convoy to a commemorative 3-day tour of the Vogtland. He and four of his comrades from the 87th ID were the honored guests.
On April 16, 2010, at a commemorativ event, held at the 65 anniversary of the liberation of the city a plaque was unveiled on a historic piece of wall on Neustadtplatz.
In the ceremony in front of hundreds of spectators, the veterans and high-ranking guests, among them the then Consul General of the USA in Leipzig, Kathrine Brucker, visited the bridge.

The two commemorative plaques were placed in April of 2015 as part of a commemorative event attended by US Consul General Robert Gatehouse and Sgt. Major Karl Brunell, representing the US Forces in Germany. An interesting guest was Alan Bonde, the son of Ed Bonde who had served with the 312th Engineer Batallion in 1945. He brought interesting photos his dad had taken in the area in 1945. In December of 2015 in cooperation with the City of Plauen the commemorative plaques were installed on stone foundations near the Elster Bridge. That was possible because of the support by "Bürgerstiftung Plauen" (Civic Foundation) and the “Förderverein Komturhof Plauen e.V.” 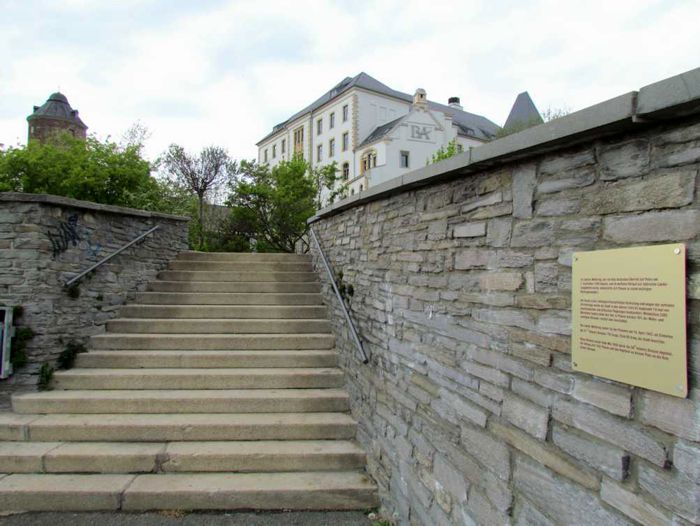 On the occasion of the Liberty Convoy commemoration
in 2010 a sign was installed on Neustadtplatz to recall the fact
that it was the US Army which had liberated Plauen
and the Vogtland from war and the Nazi Regime. 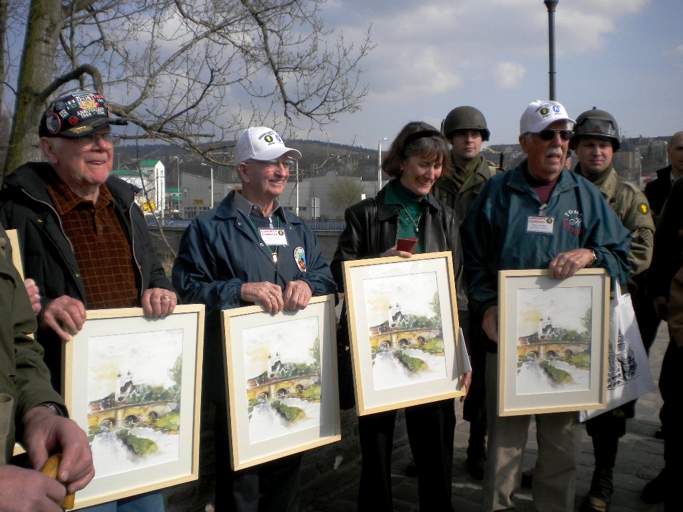 LIBERTY CONVOY April 16 2010:
With an Aquarell by the artist Andreas Claviez held by the Veterans
Tom Stafford, Eldon Gracy, Jesse Bowman, Gene Garrison and
Tom Burgess (the latter not shown) and Katherine Brucker,
US Consul General from Leipzig, atop the Elster Bridge.

Commemorativ event at Elster Bridge on April 2015.
As a guest among others: Alan Bonde (in the light shirt). 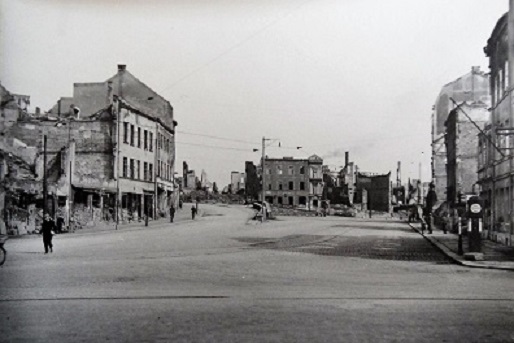 This photo of Neustadtplatz after WW II shows the dense structure typical for the city.
Photo: Archiv Hager

Today only the walls are present from which a street
to the castle deviated.

For Plauen the preservation of the vintage Elster Bridge is a great stroke of luck. Until the 1970s, when the new bridge next door was built, the stonemade Elster Bridge was very important in terms of traffic.
A lively and historically interesting area has emerged in recent years. Today the ensemble of Rähme, Komturhof and castle gives a small impression of the medieval splendor of Plauen.